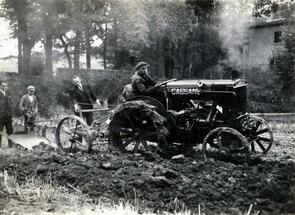 The past and the future: SAME, brand of the month

Our love for oldtimers will never fade away. But on the other hand, who is not amazed by the technical innovations that make farming as easy as ever? Let’s take a look at how tractors have developed, as we compare the oldest SAME tractor to the newest.

The brand of the month, SAME, can’t be separated from the world of agriculture. Its rich agricultural history and contribution to the technological development of our machines make the ordinary Italian proud.

Although the brand SAME was not established until 1942, the founders of SAME, the Cassani brothers, broke new ground by being the first to install a diesel engine in a tractor: the Cassani Tractor 40 hp. A progressive project at the time, but nothing compared to the latest SAME line of tractors, The SAME Virtus Family. Although both have shown great innovation for their respective time frames, the differences are, unsurprisingly, enormous. Let’s see how they match up.

Before the diesel and other forms of engines were invented, efficiency was a large issue that tractors had. The average steam engine would have an efficiency rate of 10%, meaning that 90% of energy would get lost. The inventor of the diesel engine, Rudolf Diesel, was determined to improve the efficiency to a rate of 75%. Unfortunately, Rudolf Diesel was not able to observe his invention achieve an efficiency higher than 25%, which was still an accomplishment considering the average steam engine efficiency. The Cassani 40 hp was sustainable, but nothing compared to its older brothers of the SAME Virtus family. Utilizing technology like turbo-intercooler forced induction and electric engine management, efficiency rates can get up to around 50%. Simply put, the modern day SAME tractor saves twice the amount of fuel that the Cassani hp 40 consumes.

One thing is for sure, the Cassani hp 40 won’t be able to carry the load of maintaining the average farm nowadays. With 40 horsepower and a maximum speed of 15 km/h, the Cassani is nothing compared to the Virtus, where models start with 110 horsepower and maximum speed starts at 40 km/h. The Virtus is a true all-round workhorse, suitable for nearly all tasks that need to be taken care of on a daily basis. Its loading capabilities, power and versatility show how agricultural machinery has grown since the time of the Cassani, now that we are able to combine many different functions into one tractor.

And let’s not forget about the comfort. Oldtimers may be fun, but they don’t score high on comfortability, at least compared to the Virtus. Besides the fact that a complete cabin was missing from the Cassani, luxurious features such as optional air conditioning, a color-based, clear and simple dashboard and even a cool box to store your sandwiches are only a few examples of how the comfortability has changed.

No doubt, the technological developments have been evolutionary and made farming as easy as ever. But something about that simplicity and uncomfortability of those oldtimers, like the Cassani, still appeals to us. The comparison of these SAME tractors could not express that any better.

Oh, by the way, you may want to check out the page of the Brand of the Month, SAME, where you will find over 7000 parts for your SAME machine. Don’t forget to use the code SAME12 for a 12% discount on all SAME products.

Turn your stock into cash today!

Sign up today and benefit from our expertise and the easiest way to sell.

Register as a dealer

Stay up to date!

Subscribe to our newsletter and be the first to know everything about new inventory and best deals.